No Pain, No Train on 2nd Avenue

It took close to 90 years to get this far in the construction of the 2nd Avenue Subway, but now it feels like the construction itself will take another 90 years. In the meantime many stores at the are launch box site are shuttering.
This is a great image above. It's such a contrast from the clean, rosy illustrations rendered in the early EIS reports.

Now, this isn't news. For years since the April 12, 2007 groundbreaking of Phase 1, the media has discussed the tribulations in store for the Upper East Side.
But what troubles transit advocates and rail fans is the time and treasure needed to get just Phase 1 done. The IRT was built from City Hall to 145th Street in four years, from groundbreaking 1900 to opening in 1904. The pace of construction was more or less kept in the boom years of subway construction. This could have been accomplished because of the circumstances of the time, such as cheap labor, no OSHA, lower cost of materials (no BRIC countries and oil sheikdoms to compete for scarce resources), fewer regulations, etc. However, the method of construction employed by the IRT, BMT, and IND—namely cut-and-cover—was far more invasive and disruptive, but could accomplish the task faster because long stretches of subway could be built in a single go. Plus express tracks could be added. 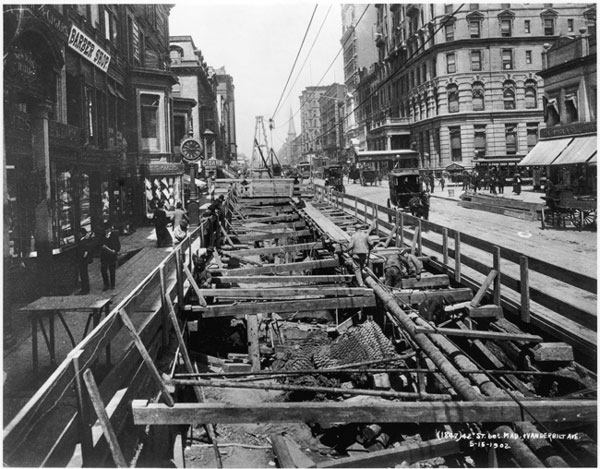 In contrast the 2nd Avenue Subway will be built using a TBM, the world standard nowadays. But it will use just one TBM that will go south from 96th Street to 63rd Street to carve out one tube and backtrack up to 96th Street to complete the second tube. The analogy I make is "typing out War and Peace...one hand at a time."

In the meantime, business close or barely skim the bottom. The city as whole pensively waits to see if this thing will actually get done and if this is the way subway construction will be from now on.
Posted by The Ego Trip Express at 2:11 PM