Walkability and the Le Corbusier superblock

Streetsblog brings up the topic of increasing walkability in NYC.

One project towards that goal is the restoration of 129th Street through the St. Nicholas Houses: 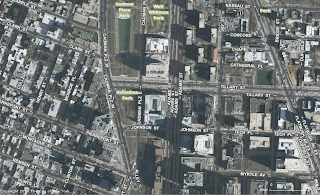 People have opinions about the whole mission of public housing, however Le Corbusier's saving grace may be all that green space. They're extra lungs for a neighborhood, before which there was none. 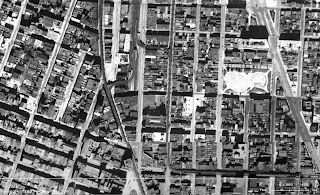 In a "satellite" photo of Downtown Brooklyn from 1924—long before Cadman Plaza and MetroTech—the area is thick with buildings with little if any greenery:

Plus they provide a shelter, for those within, from the demolition derby of the road.

They're very pedestrian friendly, but if we want walkability then allow the ground floor the buildings to be rented out for shops. Or if we're going to restore the road, then restore the original streetwall.
Posted by The Ego Trip Express at 1:30 PM