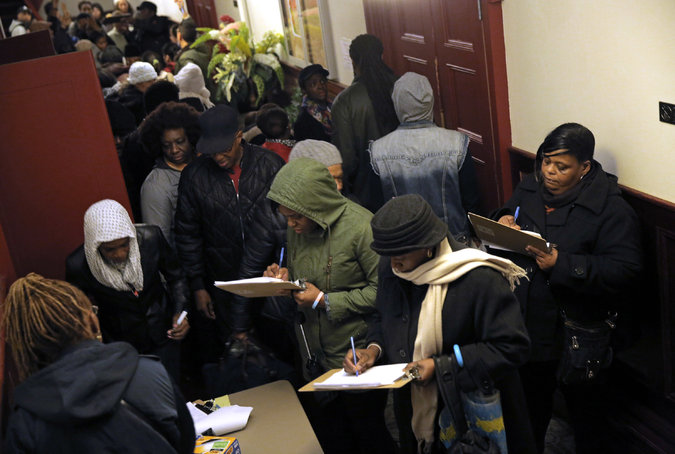 This is a different Tale of Two Cities. Not the metaphorical one used by Mario Cuomo and Bill de Blasio to describe the gap between the rich and the poor. This is a story about how New York City's poor can be divided into two groups: Winners and Losers.

This city mandates or incentivizes developers to set aside a certain number of units for low income New Yorkers. Who then—because of the sheer demand for affordable housing in NYC—can only get one of these units by applying for a lottery. Literally a game of chance. The lucky winners—sometimes a few hundred, out of tens of thousands of entries—must then endure a series of kafkaesque, bureaucratic requirements in order to not get disqualified. One would think these desperate people had just entered to win one of HGTVs annual 'dream house' giveaways.

And this is just about the Winners. What of the Losers? What of the 1,999 out of 2,000 entrants who were not lucky. They're left to deal with the slum lords, perhaps the most heartless people in this city. It's no wonder chronic heart disease and hyper-tension is an epidemic among low income New Yorkers. Losing one's peace of mind can ultimately kill you.

So how is it that the city and state consider the lottery system a "solution" as opposed to a weapon of mass distraction, away from the overall problem. It might be considered fair, but is it ethical?

The New York Times describes the lottery system as such:

Last year, a new building in Greenpoint, Brooklyn, at 1133 Manhattan Avenue, drew 58,832 lottery applications for only 105 affordable units. Not far behind was the Sugar Hill Development in Upper Manhattan, which drew more than 48,000 applicants for 98 apartments.

Topping both was the drawing this month for 38 units at 59 Frost Street in Williamsburg, Brooklyn. With rents ranging from $640 for a studio to $1,395 for a two-bedroom, it attracted more than 80,000 applications, said Martin Dunn, whose Dunn Development Corporation built the project.

The odds for these applicants are clearly daunting — one in 2,110 — but still much better than, say, winning Lotto, where the odds are one in 23 million on a $1 play.

“It really shows how desperate the need is for affordable housing,” Mr. Dunn said.

Last year, tenants won 2,500 new apartments through 41 lotteries that drew a total of 1.5 million applications, housing officials said. The lotteries are expected to multiply under Mayor Bill de Blasio’s pledge to produce 80,000 moderately priced apartments over the next 10 years, a goal that, even if reached, would still leave many lottery hopefuls empty-handed.

Not all of the mandates and tax incentives this city could muster could ever meet the demand for affordable low and middle income housing in this city. So what might? A little over a hundred years ago the city was faced with a similar situation. At the turn of the last century, the vast majority of New Yorkers lived cheek-by-jowl in the area of Manhattan south of 14th Street. The Lower East Side alone was described by historian Clifton Hood as "more crowded than Calcutta". They all needed to be close to work because fast, reliable transportation was not available. As a result, most of these folks fell prey to slum lords. Over the course of the late 19th century, the streetcars, elevated trains, and the Brooklyn Bridge helped alleviate this somewhat by encouraging southern Manhattanites to move uptown or to the other boroughs; all of which were mostly farmland.

City leaders saw reality. They made a point to finance the upgrade of the transportation infrastructure, with the help of some private contractors, to build the faster and more reliable Subway system. Within a generation, families that had once lived ten or more in a room were now living in modern one to three bedroom apartments or even in a detached single family home. And all still within the boundaries of New York City (if not necessarily Manhattan south-of-14th-Street). The government laid down the transportation infrastructure first, then let the developers build the housing to meet the demand. Today a combination of transit-oriented upzoning, commercial rezoning to build more Class A office space across the five boroughs (and not just shoe-horning everything into Midtown), the expansion of the MetroCard flat-fare zone to PATH, Metro-North, and LIRR, and most of all the expansion of the subways over the existing railroad ROWs, down expressway medians, below the streets through cut-and-cover, and across the waters to New Jersey and Staten Island, could greatly alleviate today's housing crisis.
Posted by The Ego Trip Express at 3:23 PM