"The Kind of Big Thinking That New York Needs"

So the New York Times put out a fascinating piece about an ego-tripping proposal to extend Manhattan southwards to Governors Island. 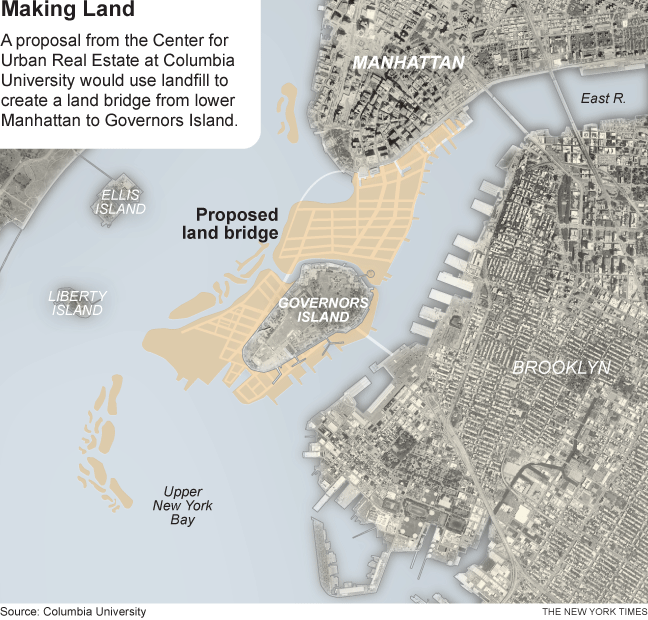 It may be an impossible project, because there are strict regulations on building with landfill. Governors Island has also become a popular destination for recreation and arts events. But the project is the kind of big thinking that New York needs, said Vishaan Chakrabarti, the director of (the Center for Urban Real Estate at Columbia University) and the Marc Holliday associate professor of real estate development at Columbia.

The easy thing to do is to snicker at the audacity of it or shake your head in cynical disbelief, which no doubt many of our city leaders are doing now. But maybe this kind of audaciousness and hubris is what this city—and country—need to fire it’s imagination.

There was a time when big ticket proposals were par for the course in the US. Consider this 1893 proposal to do the same:

Or this 1916 plan to fill in the East River, part of the Upper Bay, Bayonne New Jersey, and create new rivers/canals that bisect Washington Heights and Central Queens:

In the Times article itself is a plea from the authors of the plan to reevaluate not only the future of land use, but how we use land here and now.

A good rule of thumb when it comes to art of compromise is to start with a big demand and then negotiate it down to what you really wanted. And so perhaps in this age of small-thinking and stasis-loving luddism, even a proposal to reevaluate zoning would by itself appear to be an act of outrageous hubris. Maybe now zoning reevaluation doesn’t look as ambitious as connecting Governors Island to Manhattan and may actually get done.

Posted by The Ego Trip Express at 6:29 AM

Email ThisBlogThis!Share to TwitterShare to FacebookShare to Pinterest
Labels: regular