So, a few weeks ago there was once again talk of reviving the old Red Hook trolley plan.

This was a plan that I had seen come and go for years, but now there could be real hope that it'll come to fruition. And that's mostly due to the credibility of NYCDOT Commissioner Janette Sadik-Khan's ability to actually get things done. 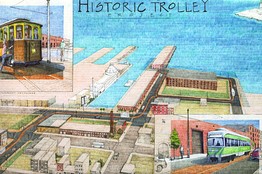 She was instrumental in closing off Broadway in Times Square and Herald Square to create pedestrian plazas. These were not new ideas, for they had been pushed for years by safe streets advocates. Ideas discouraged by powerful and influential special interests as well as some anachronistic, unimaginative, but nonetheless powerful politicians. Then, soon after Ms. Sadik-Khan was appointed by Mayor Bloomberg, the NYCDOT began flexing it's muscle and using it's untapped resources and influence to present big, ego tripping plans to carve out enforced bus lanes, protected bike lanes, and pedestrian plazas out of the city's streets. Effectively reclaiming them from the automobile; an impossible feat just a few years ago.


The MTA and NYCTA were not mentioned at all, which brings up speculation that any new streetcars would be under NYCDOT's control. Given this scenario and the Taxi and Limousine Commission's operation of the private van system, we might see the return of some level of healthy competition in mass transit that hadn't been seen since World War II.
Posted by The Ego Trip Express at 3:21 PM