The first route William Barclay Parsons (Chief Engineer of the Rapid Transit Commission) laid out while the IRT was under construction would have stretched from Claremont Park in the Bronx, run southwards to 1st Avenue, make a straight shot to the Lower East Side, and then weave it's way to the Financial District. His bosses at the Rapid Transit Commission (and it's successor, the Public Service Commission) considered the route worthwhile, but not crucial in the near term. The plan was put on the back burner with some southern stretches being adopted into the Board of Transportation's IND system in the 1930's. To this day there is no other subway line to supplement the IRT East Side (the Lex) as it runs through the dense east side of Manhattan north of Houston Street. Read more after the jump. 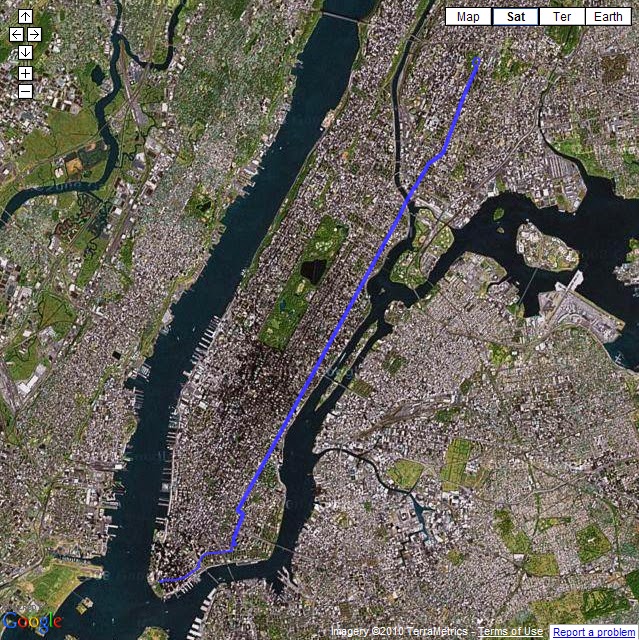 The 1st Avenue subway may have originally been intended to replace the elevated trains that used to run above 2nd Avenue and 3rd Avenue. Here is a map highlighting the routes to each other. The 2nd and 3rd Avenue els are in red and Route #1 is in red.

So this was "Route No. 1" according to Mr. Parsons. The four tracks under the Bronx indicate that the line could have run as a local further north.

In Manhattan, the line doesn't veer from it's route even as it comes close to the shore.

I had once heard that a 1st Avenue subway would be prohibitive nowadays because of it's proximity to the UN. I would think that the UN would like to have convenient subway access.

An interesting prelude for the future are the plans for Houston and Essex Streets. Plans that would be incorporated into the Board of Transportation's IND system. Even Route #1's alignment under Madison Street would be later mimicked by unfulfilled plans for an East Broadway subway.

South of that the line would service Beaver Street and possibly linked up to the Greenwich Street subway now operated by the 1 train.

Posted by The Ego Trip Express at 2:24 PM